The Looks of Crossing Delancey 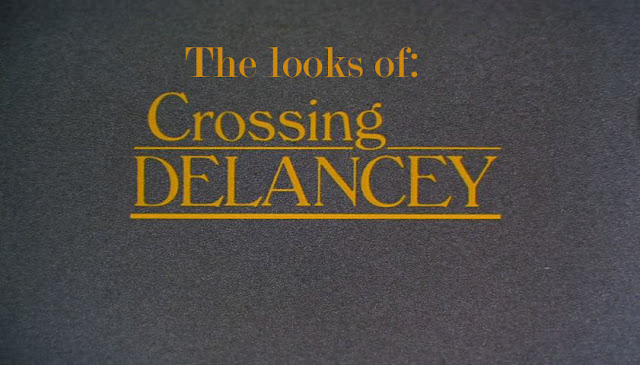 For what seems like years, I have been saying that I want a blog so that I can do a tribute to the costumes and set design of Crossing Delancey (1988, Joan Micklin Silver).  So here, at last, it is.  Crossing Delancey was notable in my childhood because it was one of the few movies that my parents went to see without me in the theater.  It was also one of the few movies that they had a VHS copy of in my synagogue library (along with the other seminal Amy Irving masterpiece, Yentl).  I used to watch it over and over again and imagine that, one day, I would live in New York and my life would be exactly like that of the character Isabelle (played by Amy Irving).  This notion was solidified when I visited New York for the first time in the early 1990s, and it looked to me just like it did in Crossing Delancey: a sea of beautifully frizzy hair, shoulder pads, and cluttered bookstores (I ran into the same frizzy haired woman, and her tweedy husband, two nights in a row: once outside The Cinema Village, and once at the off-Broadway play How I Learned to Drive starring Molly Ringwald.  On some level I based many of my future fantasies on being that couple, and thought about them repeatedly over the years.  I imagined that they had pots hanging from the ceiling in their kitchen).

Anyway, when I actually lived in and around New York from 2001-2007,  I used to complain because it didn't seem very much like Crossing Delancey at all, even though I loved it.  There were no frizzy hair or shoulder pads.  There were not enough Russian Jewish grandparents on the Lower East Side.   The independent bookstores seemed much less cluttered.  Only the relationship issues and pretentious cocktail party guests were more or less the same.  I prefer watching the movie from Los Angeles now, so I can just pretend that New York is still exactly like it was in Crossing Delancey, like I did watching it in the suburbs when I was growing up. 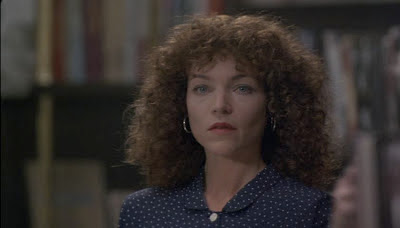 When I first saw this movie Amy Irving's hair represented everything I wanted to be when I grew up.  It says "independence" to me.  Also sometimes I think that Amy Irving is the most beautiful person who ever lived, especially when I watch this movie. 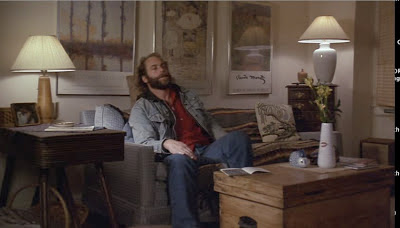 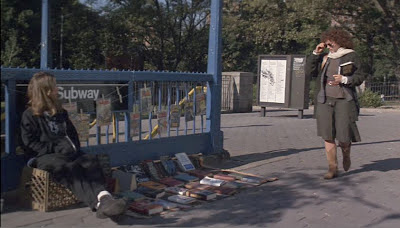 I really think there need to be more romantic comedies where BOOKS are central (see also: Hannah and Her Sisters).  What's more romantic than books?  Because of this movie I imagined that when I moved to New York, I would buy all of my books from street vendors like this one.  In reality, they rarely had what I was looking for.  Tarnished dreams.  An exemplary Isabelle ensemble. 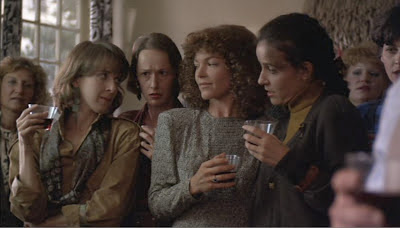 I will never feel complete as a person until I can enter cinema world and become part of this clique.  Look at them throwing shade about their friend's wussy husband at his baby's briss (why don't Hollywood movies have brisses in them anymore?  Or, like, Jewish ceremonies?).  I think that one of the reasons that I love this movie is that I imagine this is exactly what my mom and her friends were like when they were in their late 20s and early 30s in the tri-state area.  I don't think that my imaginings are so far off...  On various levels I can find shades of my entire lineage and all moments of my life in this film.  Possibly I'll write another post or a book about it. 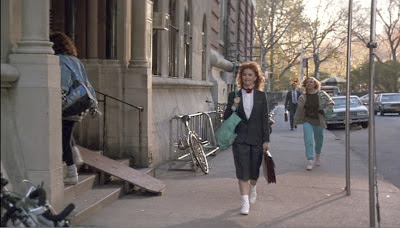 I love that Isabelle reacts with horror to her friend's corporate makeover.  Nothing says you've crossed over to the other side like a power bow.  My friend's mother always told him that you know that if a woman is wearing a power bow that she's a bitch.  I detect a hint of anti-feminism here, but it is such a mom thing to say and I love it and sort of believe it.  I love that this movie (unlike *some* Hollywood movies about feminists of the same period) demonstrates all of the clothing options that were available for professional women *other than* the power bow!  I can think of many colleagues who would accuse me of being neo-liberal right now.  I'm not saying they'd be wrong. 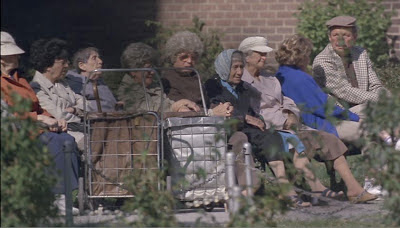 I'd like to take a moment to praise director Joan Micklin Silver for including establishing shots like this, just for the sake of conveying the atmosphere of the Lower East Side, and for adding more character to the texture of the story.  I love Joan Micklin Silver.  Even Loverboy, sort of.  But I confess that that movie makes me wonder what kind of torture she was subjected to behind the scenes... 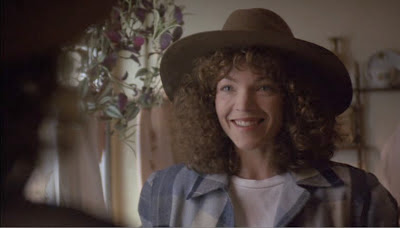 I THINK THAT WE NEED MORE HATS IN FILMS! 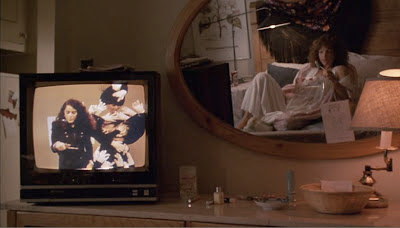 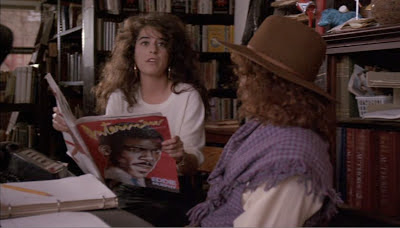 I love that Isabelle's co-worker (love the earrings!) knows that her public access show about art has arrived when it is recommended in Interview!  Eddie Murphy looks great on the cover.  Note the fabulous bookstore of my dreams in the background. 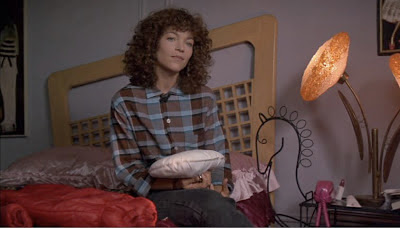 Note the expressionistic headboard.  Why isn't this setpiece on display in LACMA's exhibit?!  Actually, this whole bedroom is very Suspiria. 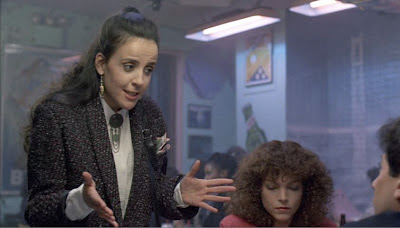 Very '80s female comic.  I can get behind this look. 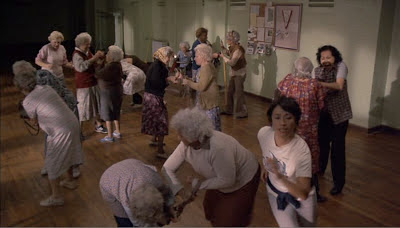 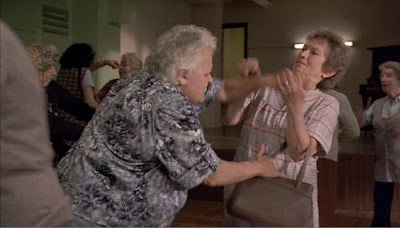 We need more senior citizen self defense classes in films.  Which is just a symptom of a bigger need: We need, NEED more Joan Micklin Silver films. 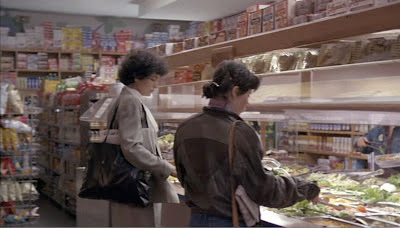 The depressing salad bar.  Hollywood's most reliable signifier for "the depressing woe of the single feminist" other than an answering machine with no messages.  I planned to get all of my meals at the corner store salad bar in my fantasies of my New York life (in reality all of the salad bars near me were kind of gross and I couldn't imagine Amy Irving deigning to eat tofu cubes from them.  I ended up eating a lot of delicious Lean Pockets). 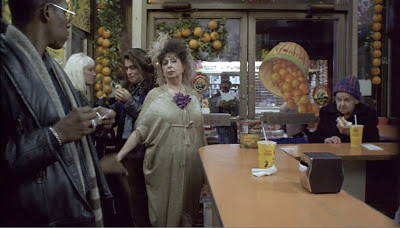 We need more movies featuring scenes in which Amy Irving is eating a hot dog when an operatically dressed woman walks into the hot dog stand and starts singing "Some Enchanted Evening" directly to her. 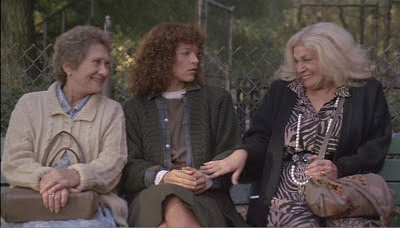 They used to show this scene when they advertised that Crossing Delancey was about to be on HBO.  I don't know if anybody will find that as interesting as I do. 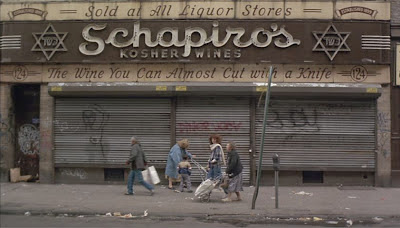 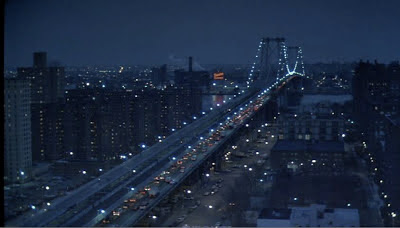 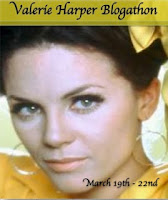